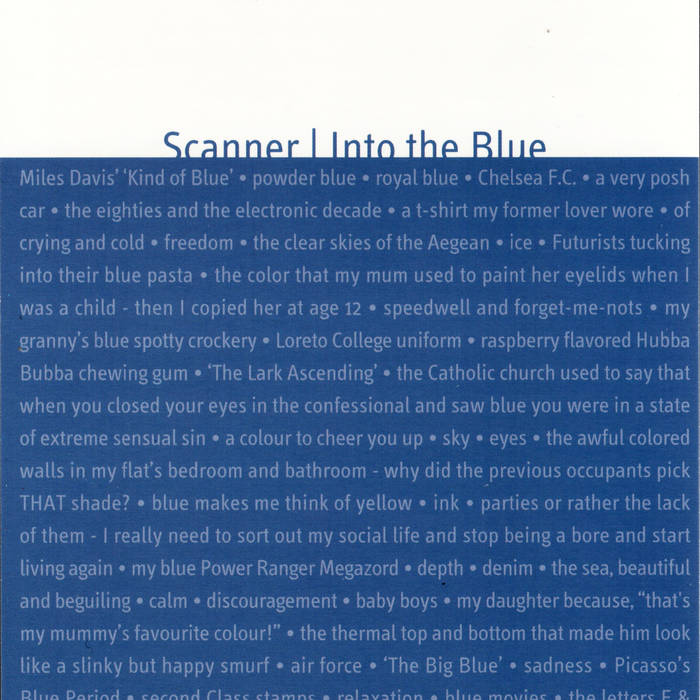 karl lovblad This is really excellent. I usually do not like Electronics with talking/singing like Eno does sometimes. But this somehow works quite well.

Into the Blue was a unique installation with audio and 7000 latex balloons at The Naughton Gallery at Queen's University Belfast, Ireland in October 2002.

"A field of balloons, as deep as the deep blue sea, engulfs the viewer, nestling up to them and creating a lighter than air environment. Soft carpet caresses your feet as you step slowly through this ever adapting space, as warm microscopic sounds flutter around your ears. You are immersed in a new commission by London-based artist Scanner, whose work has consistently explored public and private spaces, injecting them with ideas that offer an insight into the human condition with warmth and a sense of humour.

Collecting responses from people in Belfast to a simple question - What does blue make you think of? - he has printed some of the answers onto balloons that can be found all over the city and which are combined to create a multi-sensory work within the gallery.

Into the Blue is contemplative, calming and a place to reflect. It's a place to touch, listen and imagine."

The work itself was extraordinarily fun. Children refused to leave the gallery and one couple was found making love hidden beneath the mini sea of balloons. The Visitors Book noted that almost every one who visited wanted a room full of such balloons at home. What you can hear here is the soundtrack to the show, plus and an unreleased choral mix of the piece which has never been heard until now.

Alongside my installation was 'Invisible Cities', curated by Fällt designers Fehler, which offered the opportunity to experience an intimate series of portraits of some of the world's cities painted with sound. Through the interface of a gallery wall, each city, represented by a soundscape, was accessible through headphones. Visitors could transcend distance ­moving from Melbourne to Montreal from Berlin to Bombay in the time it takes to plug a pair of headphones into an alternative location. Artists included Richard Chartier, Lawrence English, Janek Schaeffer, and many more. Read more about this show here www.fallt.com/invisiblecities